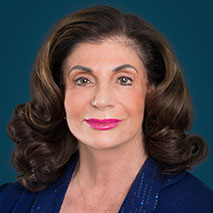 Ms. Berkley is CEO and Senior Provost for Touro University (Nevada) Western Division, in this role, she oversees two of the fastest-growing medical schools in the western United States. Prior to joining Touro, Shelley served the State of Nevada in the United States House of Representatives from 1998 to 2013. She was the first woman to serve the District and held the position for seven terms, serving on the Transportation, Small Business, Veterans Affairs, Foreign Affairs and Ways and Means Committees. Prior to serving in Congress, Shelley served in the Nevada State Legislature, and was twice elected to the Nevada State Board of Regents, serving from 1990 to 1998. She has also been an attorney for the Nevada State Commerce Department, in-house counsel for Southwest Gas Corporation, and was Vice President for Government and Legal Affairs for the Sands Hotel in Las Vegas.